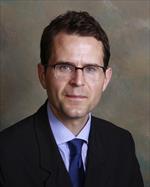 This is a two-part Phase I add-on clinical trial in newly diagnosed glioblastoma or GBM. By "add-on" what is meant is that the experimental intravenous therapy, RRx-001, is combined or "added on" to standard of care. In newly diagnosed GBM standard of care consists of radiotherapy + temozolomide (TMZ) for 6 weeks followed (after a 4-6 weeks break) by maintenance TMZ given until the tumor progresses or worsens. By "maintenance" therapy what is meant is that TMZ is given less frequently to prolong or extend the time during which the tumor remains stable. G-FORCE-1 will be conducted in two parts; in the first part of the study (Dose Escalation, Part A) patients will be entered or assigned sequentially (that is consecutively) to gradually escalating or increasing doses of RRx-001 after patients have been entered on the previous dose until such time as it is no longer tolerated. At each dose level, a separate cohort or small group of at least 3 evaluable patients will be treated. RRx-001 will be administered by intravenous infusion (in other words, by slow injection in the veins) over 30-45 minutes once weekly during radiotherapy for 6 weeks followed by the FDA-approved chemotherapy, temozolomide (TMZ) alone for up to 6 months or longer. In the second part of this study (Part B), new groups or cohorts of patients will receive RRx-001 at the dose established in Part A by intravenous infusion over 30-45 minutes once weekly during radiotherapy for 6 weeks. Then, after a 4-6 weeks break, each cohort will receive increasing doses of RRx-001 and temozolomide (in other words, a double dose escalation) to establish an acceptable safety and activity window, in other words, a dose range that is relatively free of toxicity as well as active against the tumor, although the primary purpose of this study is to assess or evaluate safety. The reason or rationale to "add on" RRx-001 to radiotherapy and TMZ, which is described in more detail below on this page, is as follows: RRx-001 is a radiosensitizer and a chemosensitizer, which means that experimentally it increases the activity of radiation and chemotherapy in tumors. In addition, in other ongoing clinical trials, patients have experienced minimal toxicity or side effects with RRx-001 alone and also in combination with radiation in the brain; therefore, the hope is that RRx-001 will synergize or combine well with radiotherapy and TMZ in GBM without adding toxicity

Glioblastoma multiforme also known by the feared three letter acronym or abbreviation, GBM, is the most common, aggressive and deadly type of brain tumor, which is standardly treated with a combination of radiation and temozolomide (TMZ), an FDA approved chemotherapy agent, followed by temozolomide alone. One of the reasons why glioblastoma is so aggressive and deadly has to do with poor blood flow: it turns out that GBM has multiple inefficient and leaky blood vessels, which leads to ineffective and irregular delivery of nutrients and oxygen to the tumor.

As illogical as it may sound at first, depriving cancer cells of the oxygen and vital nutrients that they need to grow actually makes them more (not less as might be expected) aggressive and harder to treat.

Here's why: for radiation to have an effect on the tumor oxygen is required since the combination of oxygen and radiation produces unstable and highly reactive free radicals; these microscopic free radicals are the equivalent of a spray of bullets, which ricochet or bounce around violently inside the tumor producing catastrophic damage.

Likewise, for chemotherapy such as TMZ to work it has to reach the tumor and when blood vessels are so abnormal that the blood practically ceases to flow the TMZ, for example, may either never actually get there or may arrive in such small quantities that it is ineffective.

The expression "survival of the fittest" also applies: under the poorly oxygenated harsh conditions, which result from this sluggish blood flow only the toughest and most resistant cancer cells survive, making the tumor that much harder to eliminate with traditional therapies.

Think of the blood flow to the tumor as a swamp or a marsh where the rotten water seeps and pools rather than flows and where only the hardiest organisms can compete for scarce resources and low oxygen, which partly explains why this GBM tumor type in particular is often so hard to treat.

This clinical trial, called G-FORCE-1, tests the safety, tolerability and activity of RRx-001, an experimental anticancer agent, with standard radiation and temozolomide followed by temozolomide + RRx-001 in newly diagnosed GBM. Evidence in animals and in human patients with brain metastases, that is cancer cells, which have metastasized or spread to the brain from different locations in the body, has shown that RRx-001, which has many anticancer mechanisms and is generally very well tolerated both alone and in combination with radiation in other clinical trials, increases blood flow to tumors.

RRx-001 is also thought to work by stimulating the immune system to attack the tumor; tumor biopsies or samples from patients in other RRx-001 trials have demonstrated the infiltration or penetration of a particular kind of white cell called T-cells. As a fourth potentially beneficial consequence of the increased blood flow from RRx-001, these immune T-cells may have better access to the tumor, which may, in turn, increase killing of the cancer cells.

G-FORCE-1 is a Phase 1 trial, which means that the main endpoint is to test the safety and tolerability of RRx-001 in combination with radiation and temozolomide and not its activity; however patients will be followed for responses to treatment and overall survival